Skip to content
In Part I of this series, we laid out the 3-step overall plan for how you become an investor. This was important because “plan” is the key word. Since most folks don’t have a plan to put their capital to work for them through the power of investing, they’re almost completely in the dark about what investment is, or how to retire comfortably.
Briefly, the 3 steps are: gain control over your money, capitalize, and invest. Today, we’re going to get into some of the details of the third step ‒ investing. 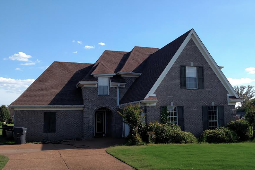 Not bad for six weeks’ worth of effort…
But it gets even better. This is clear when you look at the assumptions he made for a 10-year period (which is generally a good time frame to work with for an investment like this).
Jon figured his annual appreciation at three percent. Because he bought this property in 2008, at the height of the market, this was a good figure to work with. Now for simplicity’s sake, I’m just going to give the uncompounded appreciation number here ‒ just know that this is actually a compounded interest rate in “real life”, so the projected appreciation was actually a bit higher.
A three percent annual appreciation rate on $180,000 yields $54,000 over ten years. So the ten-year appreciated value of his account is $271,000 ($217,000 plus $54,000).
And here’s another interesting thing. In fact, some of you may have noticed this… while it’s true that Jon’s house is worth $234,000 after ten years ($180,000 plus $54,000), he’s still got to pay off the loan that his IRA received from the bank. So how does that affect the numbers?
Well, he gets about $1,450 per month in rent. After expenses, he’s left with $900 per month. What Jon does is, he uses that $900 per month to pay down the principal on the loan. And remember, it’s actually his tenants who are paying off the loan for him.
So, with $900 per month cash flow coming in from rent, he will only owe about $40,000 on the house after 10 years. When it comes time to sell, you subtract that $40,000 from the account’s appreciated value of $271,000 ‒ and you get a value of $231,000 for the IRA after ten years.
Here’s how it looks: 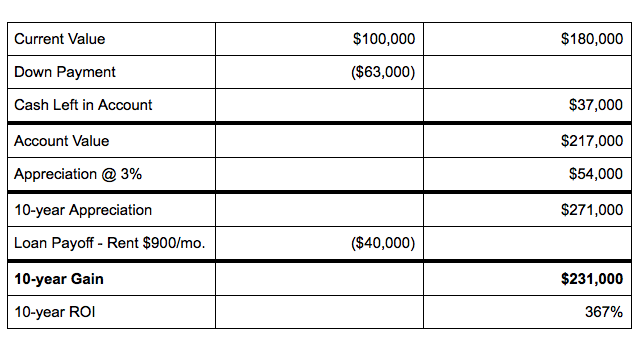 Again, growing your account from $100,000 to $231,000 like this, in just 10 years, is… amazing.
But what about that 10-year ROI number? Where does that come from?
Well, remember: he only invested $63,000. Not all $100,000 of his IRA, and not the full $180,000 the house was worth. He just invested $63,000.
And when you divide that $63,000 into the account’s $231,000 value after 10 years, you get an ROI of 367%. Spread out over ten years, that’s an annual return of 36.7 percent!
Folks, that’s an incredible return…
(The last time I checked in with Jon, his actual numbers were tracking right along with his assumptions. His investment is paying off nicely!)
Conclusion
It’s good to have assets. And for our purposes, the main reason it’s so good is because there are some very real, doable, and powerful ways to leverage that money to get you a truly incredible ROI.
It’s largely a matter of identifying your assets and gaining the knowledge of how to tap into them.
The case study we walked through is just one example of the many ways you can play the real-life game of real estate investing… and play to win. Big.
In the next post in this series, we’ll dive into the rules and guidelines you should use when choosing the right properties to invest in…
Give us a call at (801) 990-5109 or schedule your free appointment here to begin your personalized Wealth Plan. We’re happy to help you clarify and reach your financial goals by investing in real estate.